Kei (ケイ, Kei?) is one of the protagonists of the Dirty Pair television series. A hot-headed tomboy, she is part of the Lovely Angels with her teammate Yuri. She has red hair, tanned skin and often wears a silver-white uniform (sometimes light purple). She favors large weaponry and has a "shoot first, ask questions later" attitude.

Kei is the more outgoing of the Lovely Angels. Her fierce red hair matches her temper and woe betide the person who faces her wrath. She is highly motivated and will often move forward, sometimes, regardless of the consequences. Kei is an expert shot and is highly skilled in unarmed combat. Kei apparently dates a number of men. However, despite her evident charms, she has not managed to gain a steady relationship.

Kei was friends with a boy named Kaia, but they went their separate ways as they grew up.  (Anime: "Lots of Danger, Lots of Decoys")

Kei and Yuri were once involved in an incident that accidentally destroyed the planet Lameere that left 3521 people wounded. On another mission, which took place on Casa Noir, she apparently had a bath at one point, and two older men named Jekyll and Hyde got excited overseeing her naked body.

During the malfunction of Eleanor City's master computer Brian, Kei was woken up by her room getting too hot while Gooley was trying to get a hold of the Lovely Angels' situation. As Kei went out to their apartment's main room, she found frozen, and Yuri cuddled in a blanket. While they lost contact with Gooley, Kei attempts to use their computer with her feet while cuddled in Mughi's fur to get a hold of him again but instead malfunction and explodes. As they both leave the tower to try to stop Brian, they see that it is flooding.

When they got out into the fleeing crowd in the city streets, Kei grabbed hold of a megaphone after they both shed off their casual clothes into their uniforms. As she attempts to tell the crowd that the Lovely Angels are here to save them, the crowd was confused and didn't know who they were by that name. After the flood breaks out of the building into the streets, causing the crowd to flee again, Kei jumps up and grabs onto a pipe and swings by to grab Yuri and two random male civilians as well to the top of a broken walkway.

Afterward, they attempt to get to the top of the tower to take out Brian. Still, he activates the elevator while standing on top of it, pushing them to the ground as they witness a small ship filled with tower personnel trying to talk to them get destroyed by a part of the tower that Brian controlled to do so. After Yuri contacted Nanmo and they both fell into a ship hanger, Kei fixes up one of the ships so they can get up to the top. As Kei drives the ship, it falls into a hole in the tower, that both of them get out of the ship. After getting out, Kei called over their ship; the Lovely Angel used the warp drive to crash into Brian, destroying him and as a result, the Eleanor City tower titled and the need for a new master computer to be developed. At the same time, Kei went to sleep in the Lovely Angel while still crashed into Brian.

During the aftermath of Brian's destruction, both of the Lovely Angels were sent by Gooley to find the cause of the accidents of the Cosmo Plane Service's spacecraft happening recently. To Kei's annoyance, they were forced to work under the 3WA operative Nova Grave as their senior, who she assumed had chest hair because she disliked him. Their assignment was to go aboard the luxury spacecraft known as the Tenan I to find the culprit responsible for the ship bombings. Kei and Yuri were going to be assigned to be in the lobby and pose as simple passengers and look into the places that only women can go in and assume the possibility of the terrorist being female.

Kei chose not to go out and put on a spacesuit to investigate the ship's hull. Grave caught her, but before requesting her to stop, he decided it was a good idea for her to check outside after receiving a message saying that two passengers were found unconscious at the airport, meaning two of the terrorists were posing as passengers. Out on the ship's hull, Kei found three of them outside planting bombs on the ship. While Kei started a gunfight with them, she had Nanmo go around and disable the bombs that were being placed. Kei requested backup, having Grave send Yuri, but she couldn't make it due to being caught fighting with two other terrorists. Being too late and one of the small bombs going off, Kei and Nanmo survived the explosion and went back inside the ship where she met back up with Yuri and found that Grave was injured from a gunshot.

Both Kei and Yuri went out into the ship to get the passengers to escape, but a metal door was in the way, which Kei shot open. Kei brought an older woman on her back to help her escape, but a young man offered to help her and then gave her to him so she can get going. While Grave requested that the pair leave as well, they both rejected and decided to prevent the crash. Kei decided that with the auto control disabled, they would have to do it manually even though this was her first to driving a huge ship and told Yuri to contact the Dolmedo City airport. While Kei was doing a good job guiding the ship's course left to the airport, Yuri found that the reverse thrusters were out, and Kei then chose to switch with her, which she concluded that she would have to go and ignite the ship's boosters herself. Kei took Nanmo with her and used a bomb to make a hole in the ship, put two electrical cords together, and got the boosters working, which got Yuri to ship land at the airport successfully.

After the incident, both of the Angels visited Grave while he was in the hospital, and both of them kissed him on the cheek to make him feel better. Just before they left the hospital, Grave requested that he would like to work with them again and unbuttoned his shirt, showing he has no chest hair, which Kei approved of.

At the 3WA, Kei complained to Gooley Andrew Francess about the fact that she absolutely had to make her reports in writing. Gooley said it's her own fault for letting it pile up.

Sometime later, with its impulse engines on, The Love Angel headed off to Karosu prison. Aboard the ship, Kei briefed Yuri, who was stroking Mughi's back, about the mission.

The Dirty Pair investigated the theft of precious metal, involving a dashing thief and attacks on refineries producing the same metal by terrifying monsters. The two cases turned out to be connected. They linked a mad scientist, Professor Wattsman, who hoped to bring about a new species of life.

Another pic of Kei

Kei as she appears in Affair on Nolandia

Kei as she appears in the OVA

Kei being ambushed in the bath 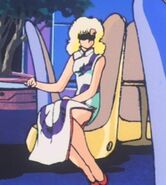 Kei in "Revenge of the Muscle Lady"