Edit
watch 01:36
We're Getting Mutants in the MCU - The Loop
Do you like this video?
Play Sound

The Lovely Angels are a female duo working for the World Welfare Works Association trouble consultant team 234, consisting of Kei and Yuri, the main protagonists of the series. They are more publicly known as the Dirty Pair because almost every mission they are involved in ends up in a disaster, even when successful. They are often accompanied by their large pet cat Mughi.

While there are slight differences in the Lovely Angels history throughout the continuities in the Dirty Pair franchise, the most commonly used history the angels have is that both Kei and Yuri met each other 4 years before they both graduated from planet Mezuiru academy and became a team together when they joined the 3WA right after.

In the Dirty Pair Flash continuity, it is shown that the team code name is passed down as Kei and Yuri weren't the original members, but Iris and Molly were.

The inspiration that Haruka Takachiho got for the Dirty Pair was during a visit to Japan by the British Australian SF author A. Bertram Chandler, probably in 1978. On his itinerary was a stop at the young Studio Nue, which Takachiho co-founded. As something to entertain their guest, two of the staffers there, Yuri Tanaka and Keiko Otoguro, hit upon the idea with Takachiho of taking Chandler to a tournament of the All Japan Women's Pro-Wrestling organization, which was a member of the World Women's Wrestling Association (WWWA). The card included the highly-popular wrestling (and singing) team, the Beauty Pair consisting of Jackie Sato & Maki Ueda. Something that passed among the foursome during that match led Chandler to remark to Takachiho something to the effect that "the two women in the ring may be the Beauty Pair, but those two with you ought to be called 'the Dirty Pair.'

This became the germ of an idea for a novella Takachiho decided to write, transplanting the rough-housing of pro-wrestling to the realm of space-opera mystery stories, with which he already had experience in his already successful Crusher Joe series. The team code-name "Lovely Angels" is also plays on the names of certain women's teams of the time, such as the Queen Angels.

Main article: The Great Adventures of the Dirty Pair (manga)

The duo has become a big influence in many other media in both Japan and the west over decades after its debut. Many other anime have had background cameos, such as Patlabor and duos similar to that of Kei and Yuri, made in series such as Mai and Yui Kamishiro in Jushin Liger and the title characters of Panty & Stocking with Garterbelt. There have been American comic characters as well that are direct clones of them, such as the short-lived comic series Danger Girls and the characters the Dirty Angels from Marvel's Excalibur series. There have been video games with stylistic homages to the series, like the Sega CD game Time Gal. The popular American TV series Star Trek: The Next Generation has also had several references to the Dirty Pair over the series. 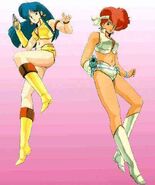 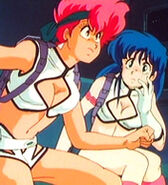 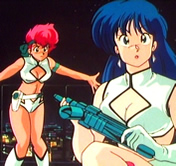 Dirty Pair on the cover to Project Eden 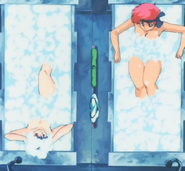 The Dirty Pair bathing in a hot spring
Community content is available under CC-BY-SA unless otherwise noted.
Advertisement