Sandra Guts ((サンドラ ガッツだと ), Sandra Guts?) is a villain and former 3WA trainee from the Dirty Pair OVA episode Rigged Ring? Revenge Of The Muscle Lady. She is an old acquaintance of Kei and Yuri. Years after, she used a new performing enhancing drug known as "Hustle" to gain a great amount of muscle.

Sandra is shown to be very aggressive and winning obsessed, holding a grudge against the Lovely Angels for many years and forcing them into a wrestling match to prove her superiority. When angry, she often acts before she thinks, choosing to use her great brawn instead of her brain. The Hustle drug she's using amplifies this uncontrollable anger.

Despite this, she seems very good at operating a business, effectively producing and distributing Hustle across the city. She is also shown to be smart enough to recognize possible threats, although her ego and envy of the Lovely Angels often negate this.

In the English dub, she has a thick accent.

Sandra has black hair and purple eyes, with slightly tanned skin. She has a red dot on her forehead, which may be a bindi. Before the OVA, her body type is normal for a woman. Overtime (likely from constant use of the "Hustle" drug) she gained a bulky, man-like physique. Once she takes more Hustle in the episode, her body size seems to grow bigger. These muscles are not just for show, as she is strong enough to bend metal with a single punch.

Sandra originally wore a large, cover-all white robe. When training, she wears a blue leotard with bright yellow wristbands and a gold ring around her right bicep. In the ring with Kei, she wears a red sports bra with blue and red pants, a blue belt, boots, and red wristbands.

Sandra was a top student at the 3WA training center at the same time the Lovely Angels were. She claims to have been better than them at everything, but was ultimately rejected by the aptitude test, and Kei and Yuri were given the Trouble Consultant positions. The reason she was rejected is unclear, but it was likely due to her clear temper and ego. In fact, since Sandra is the one to detail most of her own history, it's possible that she greatly exaggerates her accomplishments. She also apparently picked on Kei and Yuri during their time in the training center, enough to garner the nickname of "Scary Sandra" (or Sandra the Bully in the sub).

Sometime later, she leaves the 3WA and becomes involved in a crime syndicate, eventually becoming the boss. This syndicate begins distributing Hard Muscle (commonly referred to as Hustle), an injection based drug that originally helped body aches but instead abnormally increases muscles.

Reencounter with the Lovely Angels[]

The 3WA finds out about Hustle, and begins investigating. They soon find the boss to be Sandra, now extremely muscular. Kei and Yuri do not seem to recognize Sandra, but are tipped off by the dot on her red forehead. They are both outwardly disgusted by her new physique, with comments like "is that even a woman?" and "she seems extreme". The 3WA consider Sandra to be their responsibility, and thus their own mess to clean up rather than the police. The Lovely Angels are sent to investigate, eager to return the bullying Sandra did to them.

Sandra catches word of this, immediately recognizing Kei. However, she insists her men do not intervene and she deal with them herself. She then injects herself with more Hustle, causing her muscles to immediately grow large enough to rip through her clothing.

After taking Kei hostage, Sandra puts her into a wrestling match between them, viewed by all her subordinates, to further her ego and prove she is the stronger one, a grudge she has held since their training. While Kei's taunting clearly upsets Sandra mental, her physical body has grown considerably, feeling none of Kei's physical attacks. Kei simply avoids her attacks, opting to run away and buy Yuri more time to sneak in, with most guards being distracted by the fight.

Yuri later discovers that the Hustle manufacturing facility is attached to a rocket, about to launch itself and the syndicate (assumedly) away from jurisdiction. She informs Kei of this, who is still running from Sandra. She is caught, and thrown to the floor, with Sandra stepping on her wrists, incapacitating them. After a rant about their training, Sandra offers Kei some Hustle, insisting she can give her real power. Kei rejects, causing Sandra to continue attacking her, pushing her out the window and believe she gone. Sandra is informed of the break-in and rushes to the rocket, authorizing an immediate take off.

Kei and Yuri (who is now blinded) catch up to find the rocket moments away from take off. Sandra spots them, claiming her victory. Working together, the Lovely Angels shoot a detonator, destroying the facility. They believe Sandra is dead, but she soon emerges from the rubble. She leaps at them, angry and ready to kill, but instead misses and crashes directly through the window.

While Sandra is never seen past this point, it is unclear if she actually died or not. Given she survived a massive explosion moments prior, she could have survived. 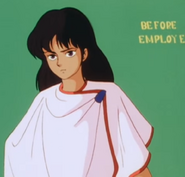 Sandra after taking a Hustle

Community content is available under CC-BY-SA unless otherwise noted.
Advertisement