Start a Wiki
Yuri is a young feminine girl who is partners with Kei in the Lovely Angels. She is one of the main protagonists of Dirty Pair along with Kei. She often wears a gold/yellow uniform and uses non-gun weaponry such as energy whips. While the more feminine of the two, she is known to become very violent when crossed.

Yuri is the least outward of the Lovely Angels, though she still is enraged when referred to by that name. Yuri displays more girlish attitude than Kei, wearing dresses and spending more time with her makeup and beauty creams. Yuri is a crack shot and also quite skilled in unarmed combat. Yuri is not seen dating as much as Kei, though she did have a childhood sweetheart, named Billy Galet. Yuri frequently reads the gossip magazines, and shares a different taste in music than Kei.

When she was seven years old, her childhood friend Billy Galet promised Yuri that he would travel across the stars with her once he finished building his ship.

During the mass panic in the city, Gooley Andrew Francess asked for the Lovely Angels's current situation. In a room, the air conditioning was on full blast, causing Mughi to wrap his tail around the feet Yuri, who was shivering and sneezing. She asked the computer Brian what is happening. Kei came into the room where Yuri was to find most of the objects covered in ice, Yuri told Kei about the fact they had just lost contact with Chief Gooley and Brian malfunctioning. (TV: "How to Kill a Computer")

The Dirty Pair investigated the theft of a precious metal, involving a dashing thief, and attacks on refineries producing the same metal by terrifying monsters. The two cases turned out to be connected, the link a mad scientist, Dr. Wattsman, who hopes to bring about the evolution of a new species of life.

When a Trans-Galatic Flight was destroyed on a routine flight Kei and Yuriwere re called in. It was found that there had been no claims have been filed from any of the 300 passengers on the flight.  The conspiracy also involves a missing scientist and his family. Kei and Yuri  find themselves on a collision course involving the future of 3 worlds.

Yuri in the shower 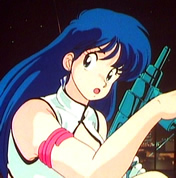 O-yuri
Add a photo to this gallery
Retrieved from "https://dirtypair.fandom.com/wiki/Yuri_(anime)?oldid=6496"
Community content is available under CC-BY-SA unless otherwise noted.